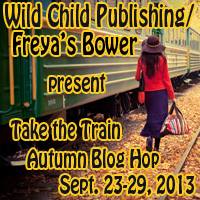 Do you have a favorite fall memory linked to a train? What do you imagine you would see if you were riding a train in the fall? Join the authors of Wild CHild publishing and Freyas Bower as we Take an Autumn Train Ride through our blogs.

< It was a crisp morning in late October. I finally made the mundane road trip up from San Diego to visit my mom. Crisp air is a rarity in my neck of the woods; I had all but forgotten what it does to my curly hair. I also forgot what cold weather really feels like. That morning I felt compelled to pull a coat out of the closet I never thought I’d wear; unless I was ice fishing. Still, I did not let the frizzy hair or frigid temperature get me down; I was preparing to take a ride on the Napa Wine Train – yes!
I am a self proclaimed wine lover. You’re not a wino if you drink corked wine… right? I heard that somewhere (probably from another “wine lover”). We arrived at the station early. As strolled around happily eating my egg and cheese bagel from Mcdonalds, I caught several strange stares from people standing in my peripheral line of sight. I did a subtle check of the nostrils to make sure nothing was hanging out, then licked my teeth only to remember I was not wearing lipstick. “You’re dressed for a blizzard,” my mom whispered. “Oh, right.” I nodded and smiled at everyone. They were serving wine – at nine in the morning! I was still clutching my coffee cup with Ronald McDonald on it. Tempting… but no; my stomach is vengeful. It was certain get even by restricting me to a train car bathroom the size of a shoe box for the entire ride.
“Okay, folks; we are going to snap your picture then you will board the train!” Everyone cheered; though we all knew what he was really saying… We are going to take your picture, put it in a fancy folder, and charge you twenty dollars for it. After stumbling off the train, you will throw your money at the cashier in a frenzied, wine-induced mob.
We were all smiles standing between two barrels and several piles of silk grape vines from Michaels. There is something special about old trains; they carry a charm and elegance not seen too often these days. The Napa Wine Train is no different; with rich curtains hugging the windows and crisp white linens over each table. Butterflies stirred in my stomach.
We sat at our table and waited for departure. Once everyone was on board and settled, the train let out a small eek as if someone poked its caboose with a needle. The murmur in the car ceased. A whistle sounding like the world's largest tea kettle sounded off. My fiance and I exchanged excited smiles. Yes, my fiancé (husband now) was there, too; but he’s kind of quiet in the mornings and did not have much to offer until about here.
With a few jolts and moans coming from the joints, we were rolling down the track. The ride was, well… a little bumpier, and a lot noisier than I expected. I’m not sure why I thought it would be smooth be like the monorail at Disneyland – silly me. I started looking around for seat belts or safety harnesses… again, silly me. The waiter came by (thank the wine gods). I eagerly ordered a glass and we all split a twenty-five dollar hamburger. About halfway through my merlot I found myself bobbing my head to the rhythmic clack and squeak as the car jerked around. I was finally relaxed enough to look out the window.
Wow! Okay, I suddenly remembered why I wanted to take the Napa Wine Train. Vineyards stretched for miles. Shades of amber, orange, and golden brown splashed the vines like paint on a canvass. I pulled out my disposable camera (yes, that’s right – disposable) and snapped away. How did those pictures turn out? Not sure; I have yet to develop the film; most likely a bit blurry with a close-up of my thumb obstructing the corner.
After a few bites of hamburger it was time to explore. We wobbled over to the tasting car. Changing cars is quite an adventure on an old train in a fun house sort of way. The eye roll from the server in the tasting car could have tipped the train. She must have thought that were a couple of jokers who knew nothing of wine. She was probably right to some degree. We approached the counter and she greeted us with her stone face.
My husband had a theory about himself. Ever since we visited the magic shop on Pier 39 in San Francisco, he believed he was the most entertaining human being on the planet... and so it began. He pulled "an ordinary deck of cards" out of his pocket.
“I would like to taste the reds on this list, please.” I thought I would order before she stormed out of the car. He did one of his favorite tricks… you know, the one where you pick a card and by some miracle he pulls the very same card. Her stone face crumbled into a smile, then an enthusiastic laugh. I caught myself doing an eye roll… oops.
She turned out to be a very pleasant person and we stayed in that car way too long sipping vino until our teeth and lips were the same shade of burgundy. Was it too much? Well by the end of the ride I was at the caboose letting my frizzy hair blow in the wind with my arms in the air, doing my best “I’m the king of the world!” pose. Once it was over there was a mob of happy winos enjoying their twenty dollar photos at the station and we were right in the thick of it. Here it is... 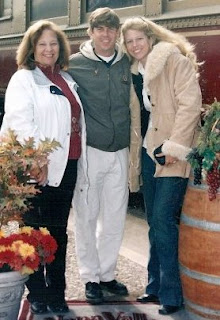 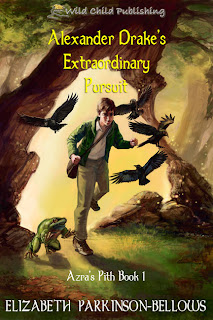 Alexander Drake’s Extraordinary Pursuit Alexander Drake is a curious young man. He lives in a drab, oversized mansion with his secretive father and spends his days playing alone. Where is his mother? And why is his father so tight-lipped about the past? But secrets have a way of getting out. And a stay at his grandmother's cottage provides strange clues to his father's past. A past Alexander is determined to find out about. With a mysterious key and several maps in his pack, he sets off on an innocent search for answers about his family. The discovery of a secret passageway opens the door to dangers, and wonders, unimaginable. And each answer leads to more questions and the journey of his life. Join Alexander for a thrilling adventure in Azra's Pith, a place of beauty and magic... but beware--something evil lurks in the shadows. 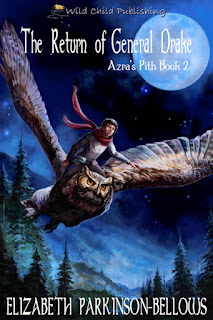 The Return of General Drake When Alexander arrived in Verhonia, something went terribly wrong. A dark spell delivered from the mountains of Acadia sent him on a dangerous journey in the middle of the night. As he marched into the mountains, the great city of Verhonia was ambushed and burned to the ground by Roman's army of vicious giant murks. With the safety of the realm in jeopardy, General John William Drake was asked to come back to Azra's Pith. He swore he would never return. But after discovering his son was under a spell and in the grips of a dark sorcerer, he had no choice. Things take a wild turn in the mountains, with runaways, a hungry wolf and a mysterious, young empyrean wizard thrown into the adventure. A tight race against time and evil is in full swing. With faith and a little magic, they just might come out on top.!>

Please visit these sites for more chances to win, the more you visit the more chances you have to win. We have 46 participating authors. You can stop at as many or as little blogs as you wish. At each stop, you will find either two chances to enter per blog to win some awesome prizes. If you visit all, that's 92 chances to win! There will be five, lucky winners.

a Rafflecopter giveaway
Posted by Lizzypbellows at 9:27 PM 13 comments: