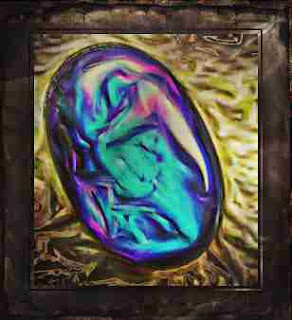 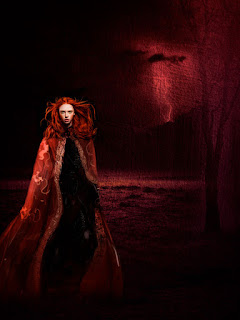 On a bright, beautiful afternoon a red robin fluttered through , dodging the sunbeams as she made her way to the passageway. This was not an ordinary bird; this was a young Empyrean Wizard by the name of Celeste. Of course, Empyrean Wizards lived in an extraordinary place where fantastic creatures and magic were a part of every day.
All Empyrean Wizards have a bird form appropriately coordinated with their personality. This particular Empyrean was fearless and kind. She also had a knack for finding adventure and what ever trouble may accompany it.
Celeste perched on her favorite boulder for watching the passageway… the magical opening for people to enter Azra’s pith from the other side, as she like to call it. Her vibrant red feathers transformed to reveal wild hair the same shade of red as her feathers. “Today has to be the day.” Her green eyes twinkled. She gazed in anticipation at the base of a large tree. “Someone is going to leap through at any moment. I just know it; and I will be the first to say hello.”
A prickly chill traveled down her spine. She squeezed her arms across her chest and soothed her goose bumps.  “Something isn’t right here.” Celeste glanced around, feeling an evil energy draped around her. An angry groan rumbled through trees, breaking branches and sending twigs flying. “It’s the Rive!” She gasped and scrambled behind the boulder.    As the dark spell made its approach the moan went from a groan to a vicious roar. A wind funnel in the shape of a pair of long, wretched claws came into view. It plowed through trees and tossed dirt in the air. Celeste’s cloak whipped around in a frenzy. She crouched behind the boulder and gripped her hands around the base. Rocks and tree branches shot passed her.
She felt her body lifting off the ground. Inch by inch, her fingers slipped from the boulder. “Oh no!” Her head throbbed from intense pressure as the wind consumed her.
“Where is it? I must find it.” The Rive whispered sharply, bringing a sting to Celeste’s ears.
“Where is what? What are you talking about?”  She shrieked.
“Where is it? I must find it!” The Rive’s whisper was now at a rattling shrill.
Celeste closed her eyes and fisted her trembling hands. “I have to channel the élan. Come on Celeste… concentrate. I can do this!” A warm, vibrant energy burst through her cloak. The dark spell let out a hiss and instantly vanished, dropping Celeste to the forest floor.

The wind removed layers of dirt and debris from the forest floor. As she sat on the boulder, something caught her eye. A slight glimmer shined through a clump of dirt. She scooped up the clump and scraped the forest coating off it until all that remained was a medallion with strange markings. It chimed and sparkled in her hands. Celeste stuffed it in her cloak and cautiously looked around. An excited giggle slipped out just before she morphed back into a robin and flew above the trees.
***
A short distance away in a dense part of , sat a quaint wood cabin with a stream of smoke drifting out of the chimney. The cabin was as warm and inviting as the jolly, old wizard living within its walls.
“Will you just look at this garden?” Julien’s extra large frame cast a shadow over his entire garden just in front of his cabin. His brown hooded robe could pass for the sail of a boat. “I don’t like to brag; but not everyone can make carrots such as these.”  He smiled at his dearest friend, Ferdinand the hopper, exposing a broad gap in his front teeth.
“Well, I suppose, if you say so. Speaking of delectable carrots… how’s that stew coming?” Ferdinand rubbed his pudgy green belly with his long fingers as he lounged in Julien’s porch chair; which was big enough to be a deck for the tiny hopper. “Look at me; I’m practically melting away. I may very well starve sitting here waiting for your stew to simmer.”
“Patience, all in due time, old friend… and I’m quite sure you will be fine to skip a meal or two.” The old wizard stroked his bushy, brown beard and raised his brow at Ferdinand’s protruding gut.
Before Ferdinand could respond a vicious shriek and cackle rumbled through the forest causing the branches to tremble. The hopper leaped from his seat with startled bulgy eyes. “What in Azra’s name was that?”
Julien’s jovial expression turned heavy and the color left his cheeks. “It came from the shadows… impossible.”
“What ─ what are you talking about? What is impossible?” Ferdinand fidgeted in the fold of Julien’s robe.
“Not to worry, Ferdinand; I’m sure it was nothing more than the forest letting out a moan in her old age. We all feel a creak in our joints from time to time.” Julien scooped Ferdinand up with his large hand. “Come, a warm fire and a pot bubbling over with stew awaits us inside.”
The old wizard glanced over his shoulder at the shadows through the trees with a concerned crinkle in his brow. The last time he heard that shriek and cackle, vicious shadow jumpers were on the move.

Posted by Lizzypbellows at 12:27 PM No comments: