John William and his new friend, Celeste are in the musty old cabin of a pirate ship... click the title below to have a listen!

Posted by Lizzypbellows at 9:27 AM No comments: 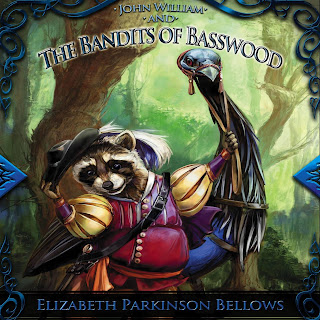 Hey All! I will be posting 30 second clips of my audio book, BANDITS OF BASSWOOD just to give you a nibble :) This is a great story for kids and the narrator really did an amazing job capturing all of the colorful characters in Azra's Pith -  click on the titles below to have a listen!

CAPTURED BY BANDITS
Posted by Lizzypbellows at 12:48 PM No comments: 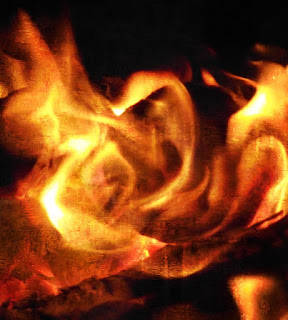 Once the wood was gathered, everyone settled in. The pop and crackle of the fire was beautiful music to John William’s ears. He sat back and put his feet to the flames. Stars spilled into the night sky. “The realm is a magical place.” He let out a soothing sigh. Not even Roman could ruin this moment.
“I think it’s time for some grub,” said Mundi, digging around in his backpack. He plopped a large pot on the fire and poured a canister of stew to the top. Within minutes, the stew bubbled over, filling the crisp evening air with a delicious aroma.
John William pulled out his map tools and sketched the details of the day… right down to the towering tree. Roman stretched his hands behind his head and propped his feet up to the fire. “So, what kind of trouble are you guys up to?”
“We are not up to any trouble; just a quest,” Mundi declared.
“Copia is hardly just a quest,” Ferdinand said. He stood up and stretched his pudgy belly. “Which reminds me; this is a serious matter; we need guidance. It’s a good thing we are close to Julien’s cabin. I will be right back. Please don’t climb any trees while I’m gone.”
“Copia? You guys really are crazy!” Roman scoffed. “Doesn’t matter, you’ll never find it without the medallion. Don’t you remember the scrolls, Celeste?”
Celeste bit her lip and fixed her gaze at her feet. Roman studied her suspicious posture. “You, you don’t have the medallion… do you?”
“Maybe…,” Celeste muttered and tightened her cloak.
“Oh, maybe… well if you do, the shadow jumpers can’t be far off,” said Roman.
John William choked on a carrot, nearly spilling his stew all over his lap.
Roman shook his head in a condescending manner. “You have no idea what you are dealing with – so typical for an outsider.” He grinned maliciously. “If you do have the medallion, maybe you should let John William hang on to it.”
“No, I will hold it.” Celeste replied in a skeptical tone.
“We are a couple of strong lads and one female I would never scrap with,” said Mundi, giving Celeste a nudge. “These shadow jumpers will stay away if they know what’s good for them. They sound like forest foxes to me. Those little fur-balls can come off as feisty; just throw some leftover stew bits their way. You will have them eating out of your hands.”
John William put his stew down; he’d suddenly lost his appetite. “Do you happen to know anything else about shadow jumpers?” He already knew what they looked like – and what they were capable of.
“No, I’ve never actually seen one; I’m smart enough to leave the sacred past where it belongs – in the past!” Roman seemed to be relishing the moment as John William squirmed in his trousers.
“Fair enough,” John William replied.
“Roman, I found the medallion and I will hold on to it until we reach copia. If it bothers you so much, please feel free to leave.” Celeste shot Roman a cold stare.
“Sorry, Celeste, I’m just looking out for you.” Roman gave her his most pitiful expression.
She stiffened. “I don’t need, or want you looking out for me.”
John William broke in to stop the familiar argument. “Well, this has been a fun bit of catching up; but I’m ready to get some sleep.”
“Great idea; I’ve got a little grub in my belly and now it’s for some shut eye.” Mundi rested his head on his backpack and draped a coat over him like a blanket.
“Goodnight.” Celeste threw her hood over her head and curled up next to the fire. She looked at Roman who was still watching her in a possessive manner. “Go to sleep, Roman.” Under her breath, she added, “I’m not marrying you now or ever.”
John William couldn’t help but smile as he slid down by his tool bag.
After a short while, they were all curled up around the fire. Mundi snored like a lumberjack while Celeste slept peacefully through all the creaks and groans of the forest. John William kept one eye on Roman.
“Don’t worry; I will keep watch. Just go to sleep.” Roman sat with a smug posture in the firelight.
“That’s what I’m afraid of. I don’t trust you,” said John William.
Roman rolled his eyes and got comfortable on the ground. “Fine, I will go to sleep and you stand watch. Be careful… you don’t want those nasty shadow jumpers to grab you up.” He laughed under his breath.
John William tried desperately to stay awake. His head nodded from one shoulder to the other. It was no use; his eyes were like lead bricks. Roman appeared fast asleep; so he gave in. All was peaceful as the moon glided across the sky. The events of the day caught up to him and he drifted into a slumber.


Much later, his dreams turned dark. He tossed and turned, trying to warn Celeste about the shadow hovering over her, reaching into her cloak. It seemed so real….
Posted by Lizzypbellows at 2:17 PM No comments: