The Door in the Ceiling 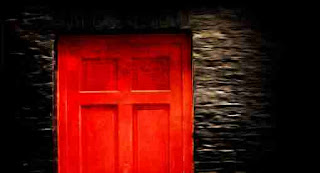 The room fell silent. John William let out a yawn. “Well, I think I’ll head off to bed.”
“Not quite, John William.” His father glanced up at the mysterious hatch in the ceiling. “You are the perfect size to fit through that opening,” said his father with a raised brow.
“What? Must we do that tonight?” John William whined.
“We must.” John William’s father snagged the lantern from on top of the mantel. “That book contained the most valuable information in this study. I have been dreaming of Copia since I was a boy. Now, I have a map.”
“Half of a map,” John William muttered.
“Maybe the other half is up there. We need to find out whatever it is. Courage, my boy… you must show your courage here. This is the best part of our lives! We are making an extraordinary discovery in our own home.”
John William huffed and dragged his feet over to the ladder. “I don’t like climbing this old thing.”
“You’ll be fine. I will be right behind you with the lantern.” His father gave him a nudge.
“Fine…” John William clutched his hands around the rails.
“Relax, son.” He rubbed John William’s white knuckled hands. “This is just another walk in the park. You can do it.”
“Okay, let’s get this over with.” John William took one step, then another; then he closed his eyes and climbed until his head hit the ceiling. He pounded the hatch with his fist repeatedly with no results.
His father climbed up behind him. Thud! He gave the ceiling one good hit. John William ducked his head and the hatch flew open. “Here, take the lantern.”
John William looked at his father’s excited smile. He swallowed the lump in his throat and grabbed the lantern. A chill hit his arm the instant it moved across the threshold. He used his elbows to boost his body through before he could talk himself out of it. “It is tight up here. My head hits the top; and the smell… it reminds me of Uncle Andrew’s old tree fort.
“Yes, yes… but do you see anything?” His father huffed.
John William moved the lantern around every part of the opening. “Aside from some scratch marks in the wood, it is completely empty – not a single trace of anything.”
“Maybe I should come up.” His father took another step up the ladder.
“Those scratch marks – they are from a rodent, right? Like a cute little mouse?”
“Yes, John William; don’t worry.”
John William crawled deeper in. Something in the wall caught his eye. He narrowed his eyes to a squint. “I, I think I see something. No, it can’t be.”
“What is it?” His father blurted.
Thump! “Did you hear that?” John William gasped. He jolted the lantern around. “I’m not alone up here.” A dark shadow darted across the wall, accompanied by more thumping.
“Look out! I’m coming down!” John William stumbled through the hatch in a frantic fit, barely getting one arm around the ladder to secure himself. The lantern hit the ground; glass shattered everywhere.
“Fire!” His father slid down the ladder and covered the wreckage with his coat, followed by a vase full of water and flowers, extinguishing the flames.
John William perched at the top of the ladder, watching his disappointed father catch his breath. “I’m sorry.” He closed the hatch and stepped lightly down to the floor.
“It’s okay; I was never really fond of that coat anyways.” He paused and smiled at John William. “You did well; I’m proud of you.”
John William felt his dad’s reassuring hand ruffling his curls. “Now can I go to bed?”
“Of course, we have an early start tomorrow… rest well.”
“Thanks, you too.” John William glanced up at the ceiling, and shuffled out of the study.
“John William… you are certain you did not see anything?”
He paused before turning the corner. “Yes. I just heard something. Maybe it was a rat?”
“Most likely; goodnight, son.”
John William waved and continued on. He did see something; at least he thought he did. What he saw was so peculiar it must have been his eyes playing tricks on him. It was a small red door with a well-used brass knob set in the wall on the other end of the space where there was enough shadow to keep it out of sight… but there was no way he was going back up there tonight. His father would have to find out another time.

Thanks for reading! You can find BANDITS OF BASSWOOD on AMAZON and other retailers...
Posted by Lizzypbellows at 1:06 PM No comments: 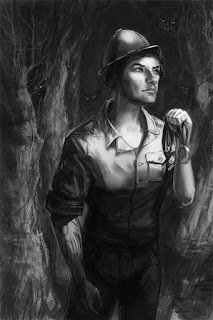 The sun dimmed to a subtle orange glow as it drifted below the tree line, marking the near end to another day in . That meant trouble for the present guardian of Copia. He pulled his sweat-drenched cap off his head, exposing his dirt crusted reddish brown curls. The shadows cast from the trees were like giants looming over him.
He glanced around and found comfort in the birds chirping, indicating the area was safe. “Another journey is almost complete, and this will be the best one yet.” The guardian reached into his pocket and eased a medallion adorned with intricate carvings out by its leather strap. “You will be safe with me for the rest of my years.” He rubbed his fingers along the surface.
The forest fell silent. “Who’s there?” The guardian shoved his hat on his head. He peered into the shadows. The surrounding trees trembled as an eerie breeze blew through. A bitter chill shot up the guardian’s spine. Snap! Twigs and other bits of forest crunched a short distance away. “Show yourself!” The surrounding trees rumbled and the echo of vicious snarling closed in on him.
He raised his trembling hand to the branch in front of him and shifted it over. As he peeked through the gap, hundreds of squinty green, glowing eyes stared back. He tried to scream but no words came out. His body froze as they slowly crept toward him. “Shadow jumpers!” He glanced around for an escape. Before he could make another move, the beasts pounced.
Razor-sharp claws and teeth engulfed his body, pulling him to the ground. He wrestled and kicked as claws tore through his clothes. The medallion was yanked from his grip; but the strap tangled around his wrist.
A sliver of moonlight pierced the trees and its reflection bounced off the medallion. The shadow jumpers hissed and pulled away. Seizing his opportunity, he leaped to his feet. Claws ripped at his back as he weaved through trees. He felt the medallion being grabbed and pulled repeatedly.
The guardian burst through a thicket of branches into a small, sparse pocket where the moonlight shined through, unobstructed by tall trees. The vicious beasts squealed, and with in seconds, disappeared back into the shadows.
Breathless and battered, the guardian collapsed to his knees. “Well, this is a fine mess.” He examined his torn, blood-soaked shirt. The medallion still dangled from his wrist. “Some guardian I’ve turned out to be.” He untangled the strap and slipped the medallion into his pocket.The trees in front of him rustled. “Oh, not again…”
A pudgy green creature with long, gangly limbs and bulgy eyes stumbled into view. “There you are! What kept you? How much time to you think I have to twiddle my fingers around waiting for you?” The frog-like creature tapped his foot with fisted hands on his hips.
“Oh, am I late? Sorry about that, Ferdinand.” The guardian grunted and groaned as he struggled to his feet.
“What happened?” Ferdinand’s eyes bulged even more.
“Oh… this?” The guardian held out his arm, revealing his wounds. Scratches and cuts covered the symbol on his arm, making it unrecognizable.
Ferdinand inspected his arm. “Your guardian symbol – I can’t even make out the feathered wings under all of your blood. Clearly you tangled with something in a nasty disposition.” Ferdinand narrowed his eyes to a suspicious squint.
“I can’t get anything past you. Yep, that bush I fell into was terribly angry with me. It chewed me up and spit me out… so to speak.” The guardian slid his torn sleeve over his cuts. “I suppose my guardian wings have been clipped. It is time to go home and nurse my wounds, wouldn’t you say?” Telling Ferdinand about his encounter with the shadow jumpers would only cause him to panic.
Ferdinand huffed. “Well, since you are late and have kept me waiting, I’d say the hour has come and gone. Now follow me; let’s get this over with.”
He followed Ferdinand to the thick base of a beautiful tree dripping with emerald leaves. Specks of twinkling light popped off the trunk until a portion of it dissolved into a hole large enough to hop through. “This is it.” He shielded his eyes from the intense light bursting through the trunk.
Ferdinand lunged into the hole and disappeared. The guardian clutched the medallion sitting nice and tight in his pocket. “If this works, Copia will be safe forever.” He took a deep breath and backed up to get a running start. At full speed, he dove headfirst through the hole. The light embraced him as he traveled through before shooting him out the other side. He took a tumble into and lay on his back, staring at the night sky.
“Until next time, my friend!” Ferdinand shouted. The guardian gave him a hearty wave and watched him leap back through the tree. In seconds, the trunk closed up and all that remained were a few lingering specks of light.
“It is so good to be home.” A broad smile spread across the guardian’s face. He rolled around on the forest floor, absorbing the familiar smells. “Oops, I almost forgot…,” he chuckled and shoved his hand into his pocket. “Oh no!” All that remained in his pocket was a bit of dirt and a few tiny lint balls… but no medallion. “It’s gone – how could it just… just disappear?”
He scoured the ground for hours with no luck. “What was I thinking… trying to take something that sacred out of the realm? Azra’s Pith is doomed.”

Thanks for reading! Just a little clue... the guardian's identity is a secret which is revealed later on in the book :) To find out what happens you can snag BANDITS OF BASSWOOD on Amazon (coming soon to other retailers).

Posted by Lizzypbellows at 11:51 AM No comments: